Come In Peace. Stand For Change.

We are proud to serve as a bastion for progressive causes. Your support allows us to develop informative media, empower fresh candidates, organize community events, and beyond. Stand with us for our shared values, the people that embody them, and a revitalized Florida.

Do you know what your city council is up to? Check here to see how council members are voting on issues that impact you.

Florida For Change is in the process of creating vote trackers for multiple cities to keep you informed.

Florida voters come in all shapes and sizes but one thing has always stood out about them.

They can spot a faker.

We’re accustomed to the cycle and the process, the people who will send out armies of proxies to every conceivable event and organization, insisting that The Candidate stands with them and has all along. They like to hand us the right words, but they don’t show up. They’ll throw a benefit dinner for donors, but they won’t go door to door.

We don’t want candidates who desperately struggle to engage with the community; we want candidates who ARE the community. We want tall trees with deep roots that form the nourishing bedrock of the grassroots and lift us all up, together. We want a deeper promise than “will get the job done” or “good enough”, because the job needs to change and good enough doesn’t cut it.

Development without equity doesn’t cut it.

Sewage spills do not cut it.

Exploiting the Black community for support while impeding them from positions of leadership?

Yeah. That doesn’t cut it. 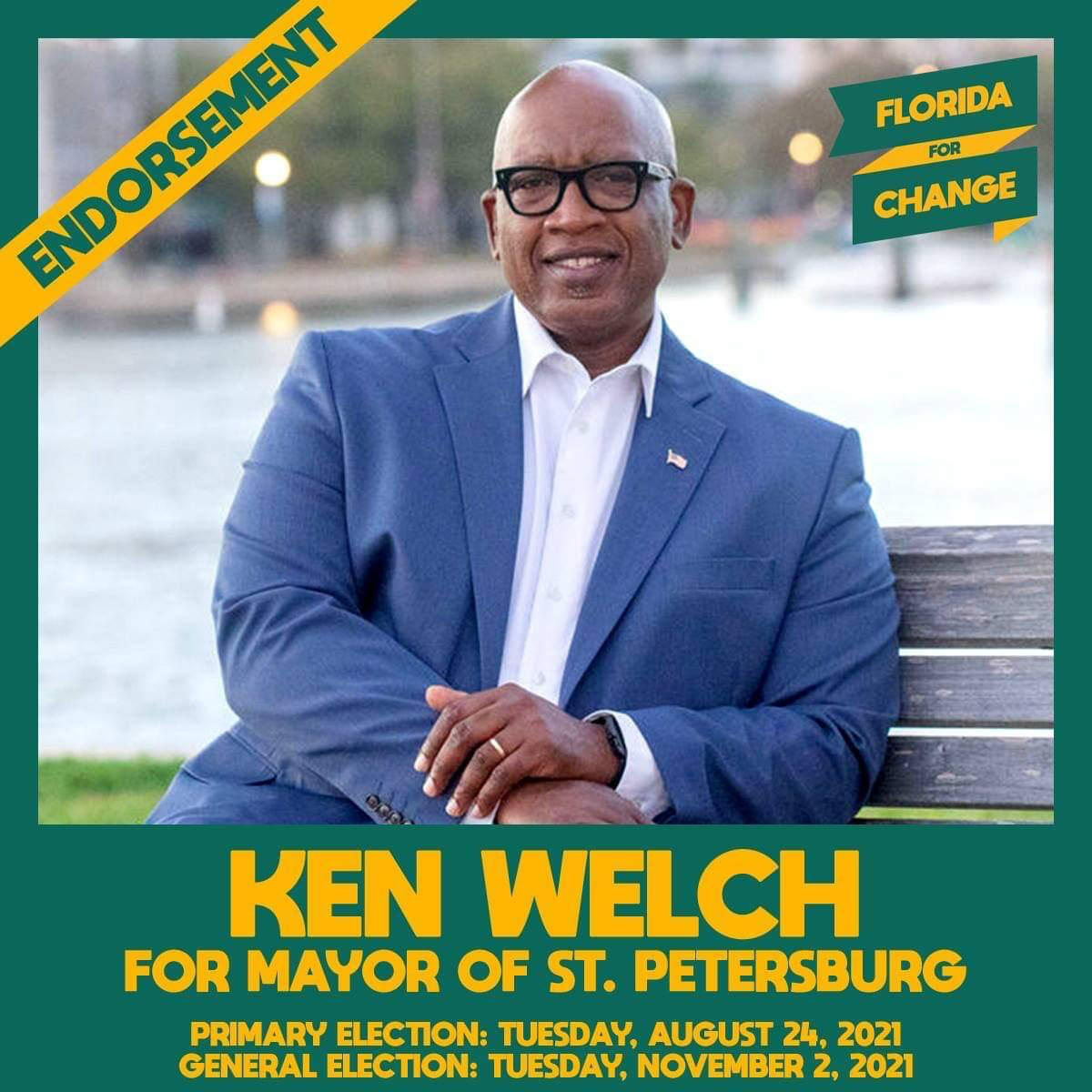 When we talk about grassroots, it’s hard not to think of Ken Welch. Ken is a third-generation resident in St. Pete, with several decades of his life given to public service. To say this gives him a unique perspective is an understatement, and in a race this crowded it allows him to stand out. On issue after issue, we trust Ken above the rest because of his deep roots. While his competitors are bathing in developer money or evicting tenants, Ken has personally been affected by development without equity; when Ken talks about the impact of Tropicana Field, he knows what he’s talking about because he was there.

Where some elected officials go on listening tours during campaign cycles, Ken spent over a year driving for Uber to get a sense of the constituency he was serving. He is responsible for repeatedly amending Pinellas County’s Human Rights Ordinance to protect the LGBTQ+ community, often ahead of the curve. He’s been a loud voice for the rights of the houseless in Pinellas County and St Pete, securing millions for the cause with steadily-paced advocacy. Even as he refused to engage with the Defund movement, Ken helped lead a charge for police accountability that brought an expansion of body cameras for the Pinellas Sheriff’s Department and diversionary programs to reduce arrests.

We lament that Ken is not quite a progressive firebrand, but his resume is undeniable and his ability to listen to progressives and implement our demands in ways that stick can’t be ignored. This is why he’s found himself with an almost bizarre assortment of endorsements including local champion Representative Michele Rayner AND Sheriff Bob Gualtieri. We also acknowledge that while Ken is no stranger to ethical hiccups and blemishes, he has shown a graciousness his competitors do not seem to possess in owning up to his mistakes.

St. Petersburg deserves many things as a city, and Ken is best suited to deliver. He is battle-tested, he has proven he can build a coalition, and he would carry a generational legacy into the office as the first Black mayor the city has ever had. To hand our Change Slate of young, fiery Black leaders to anyone else as mayor would be a disservice. 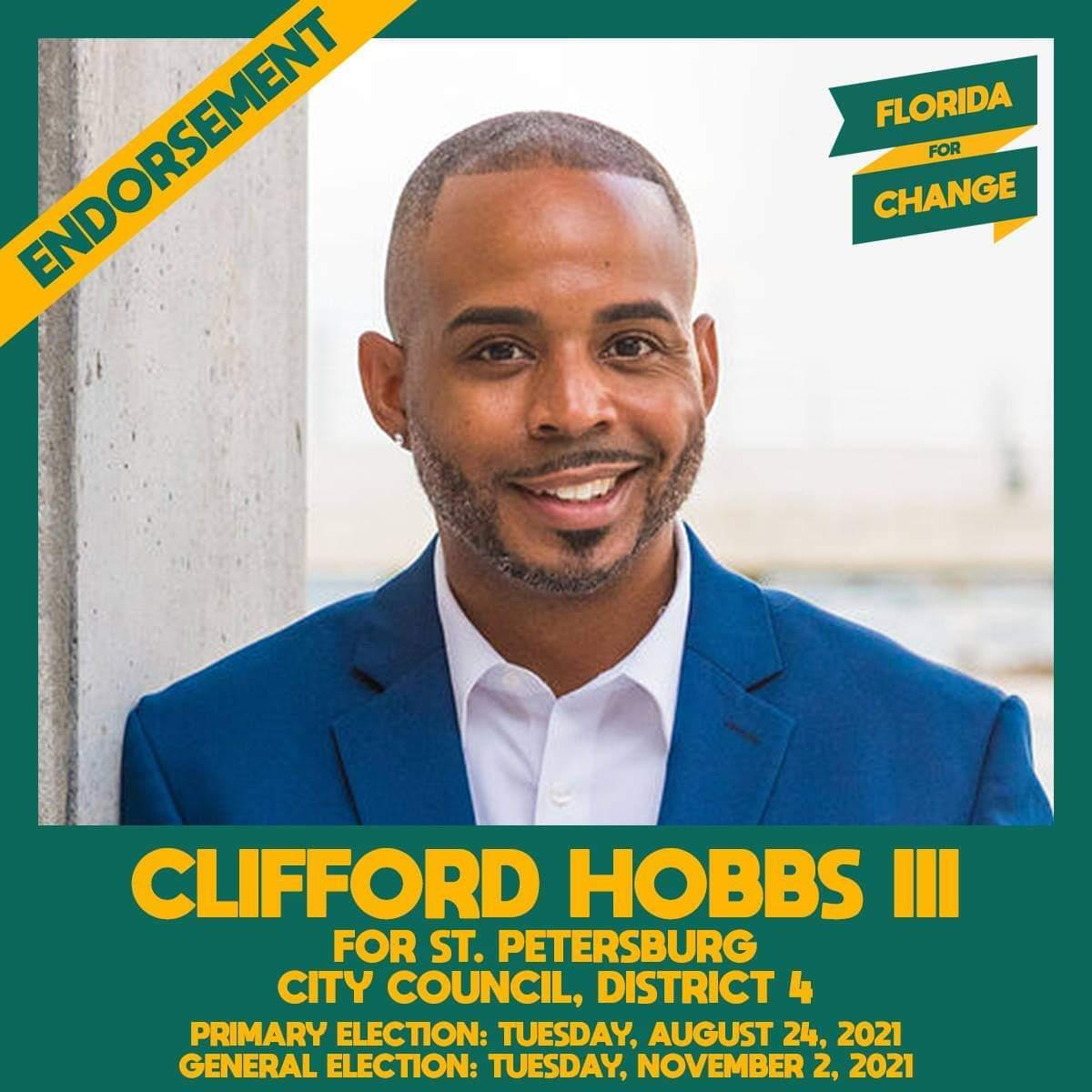 Infused with a soulful working-class power that he refers to as a "master class in humanity", Cliff has carried a mindfulness for community and structural changes throughout his eventful life. Now more than ever, with a city on the rise for some but not all and the looming threat of environmental catastrophe, good enough truly is not good enough. Cliff Hobbs understands the urgency of the moment because it’s his community - a working class bartender who gives his spare time to organizing and volunteering whenever possible, he is uniquely in tune with the needs of everyday people in District 4 in a way that has to be earned, not bought.

St Pete deserves the homegrown charm and perspective Clifford brings to the table. 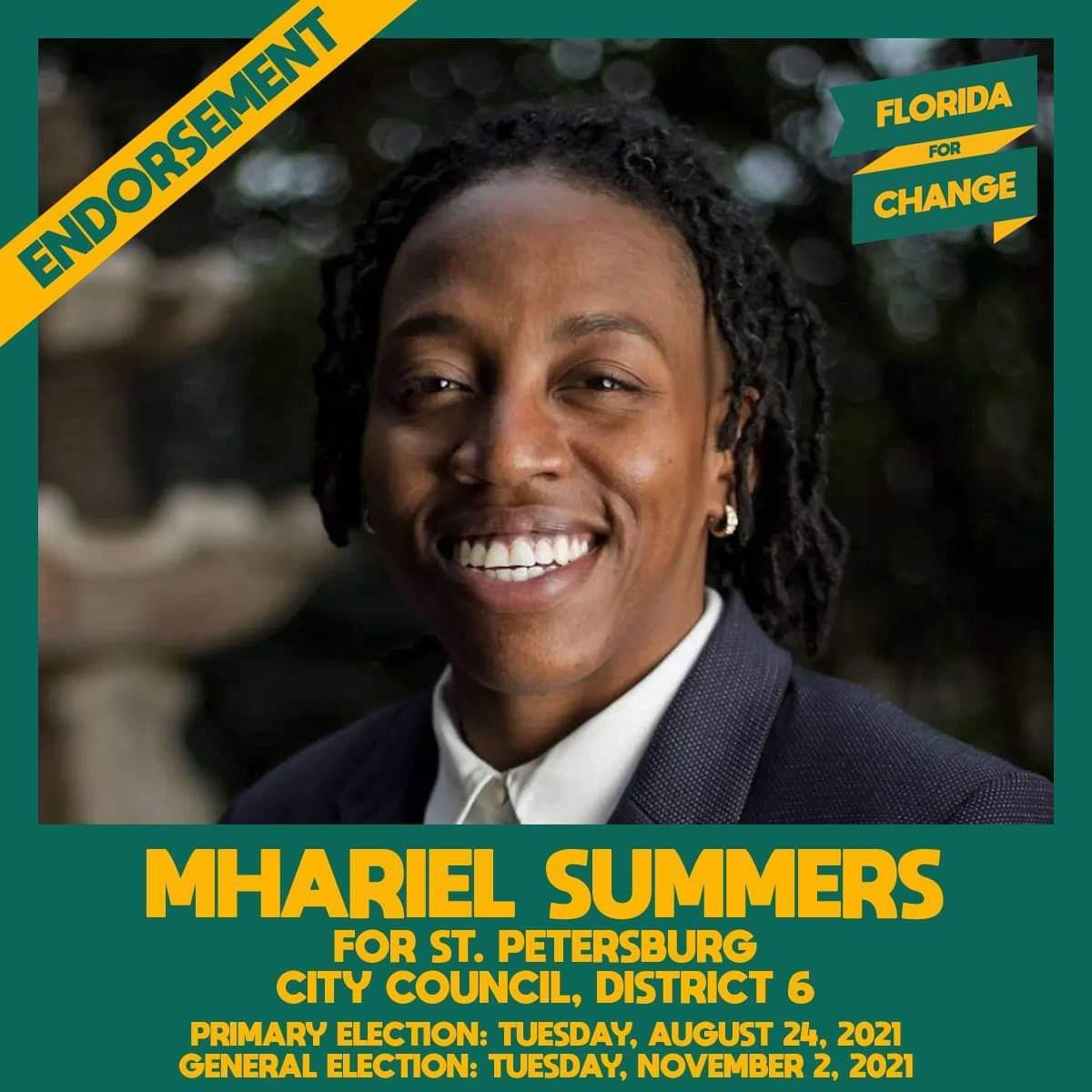 To understand Mhariel’s commitment to equity is to grasp that she meets temporary fixes with “and then” instead of “okay fine!” Years of almost exclusively working in public service means she is able to go pound-for-pound with Big Developers and Entrenched Bureaucrats, by flexing a savvy knowledge of the issues plaguing St. Petersburg. We trust Mhariel to redirect the current hunger for development at all costs into something more mindful, whether that be a more intentional investment in South St Pete or accounting for the unaddressed wounds of Tropicana Field. 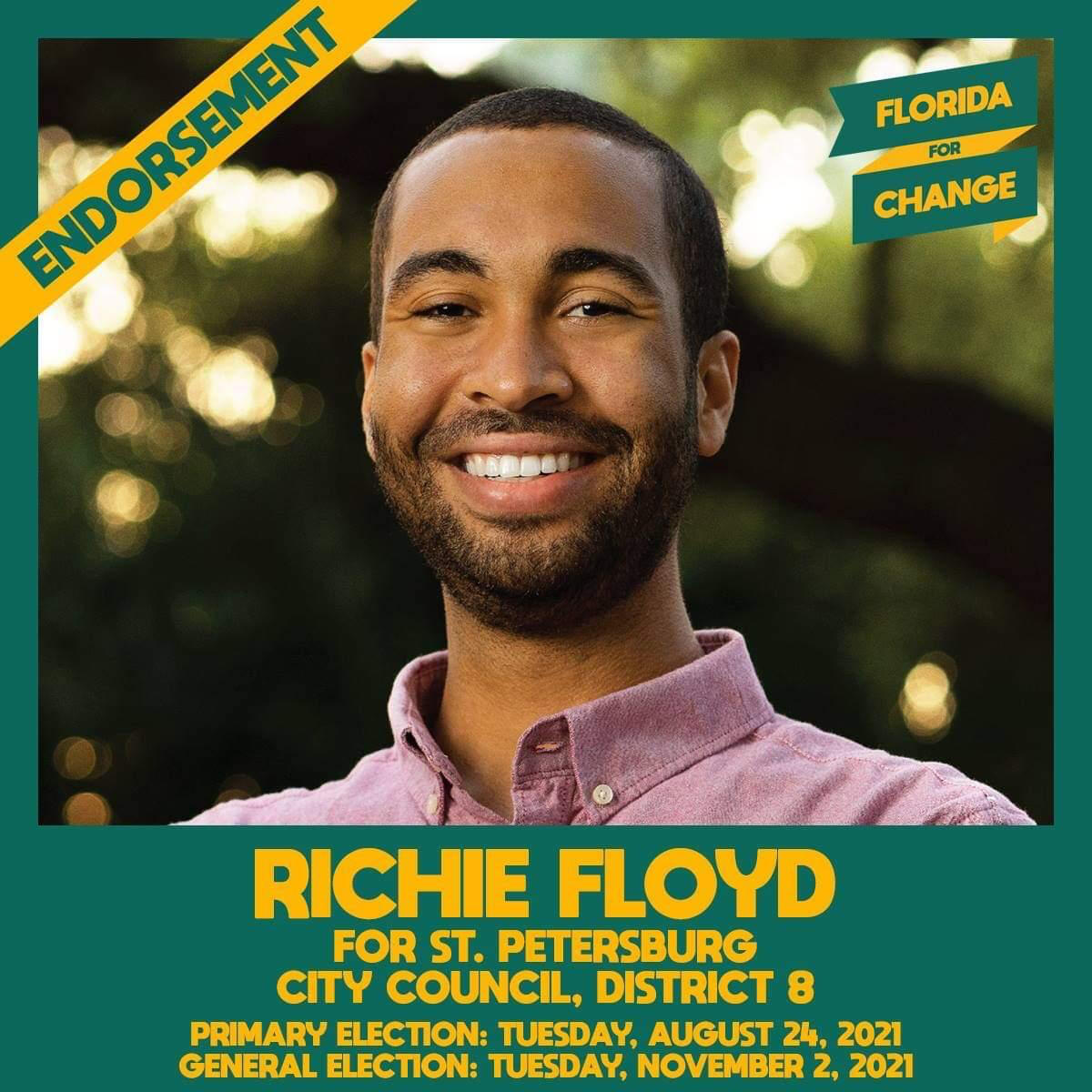 We don’t agonize. We organize.

Richie Floyd may be a newer transplant to the Tampa Bay area, but that hasn’t stopped him from diving headfirst into the Bay’s vibrant community in a way some lifers don’t. Richie tackles his problem with the sharp eye and nurturing presence of the teacher that he is, and it’s reflected in a defiantly grassroots campaign which has obliterated funding and door-knock records. Having already (successfully) helped to lead the Fight For $15 and marched for police accountability, Richie is already a local leader on the issues, and we believe his election to public office is just a natural evolution of his public service.

St. Pete deserves a candidate who doesn’t just show up when there’s a spotlight, and few people understand dedication to their community like educators.

Join us at one of our upcoming events.

Florida is one of the most vibrantly diverse places on Earth, in more ways than one. For too long, our local governments haven't reflected that energy, or our values, and have been content just to keep the lights on.

Florida For Change PAC serves as a bastion for progressive causes. Your support allows us to develop informative media, empower fresh candidates, organize community events, and beyond. Stand with us for our shared values, the people that embody them, and a revitalized Florida. 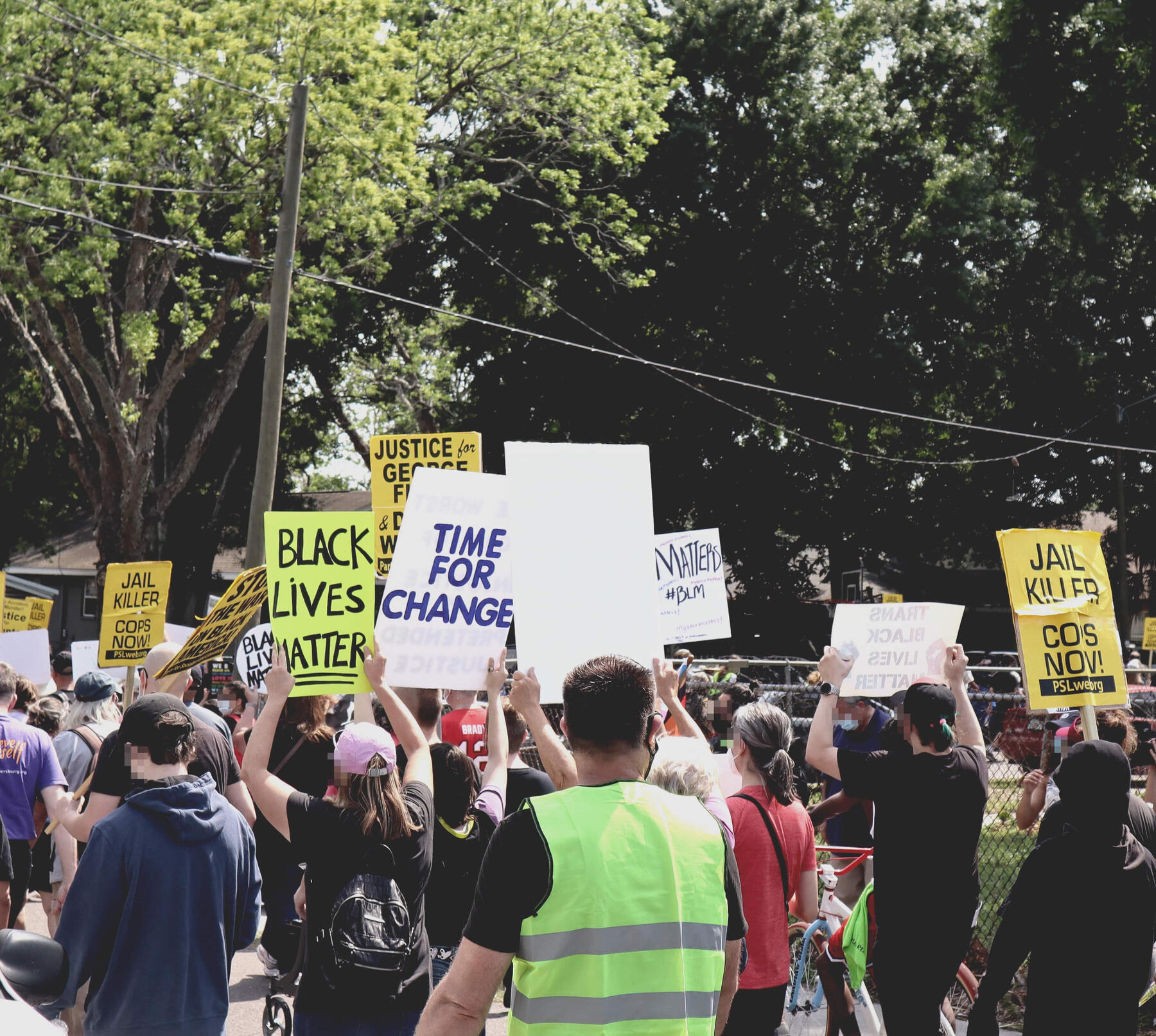 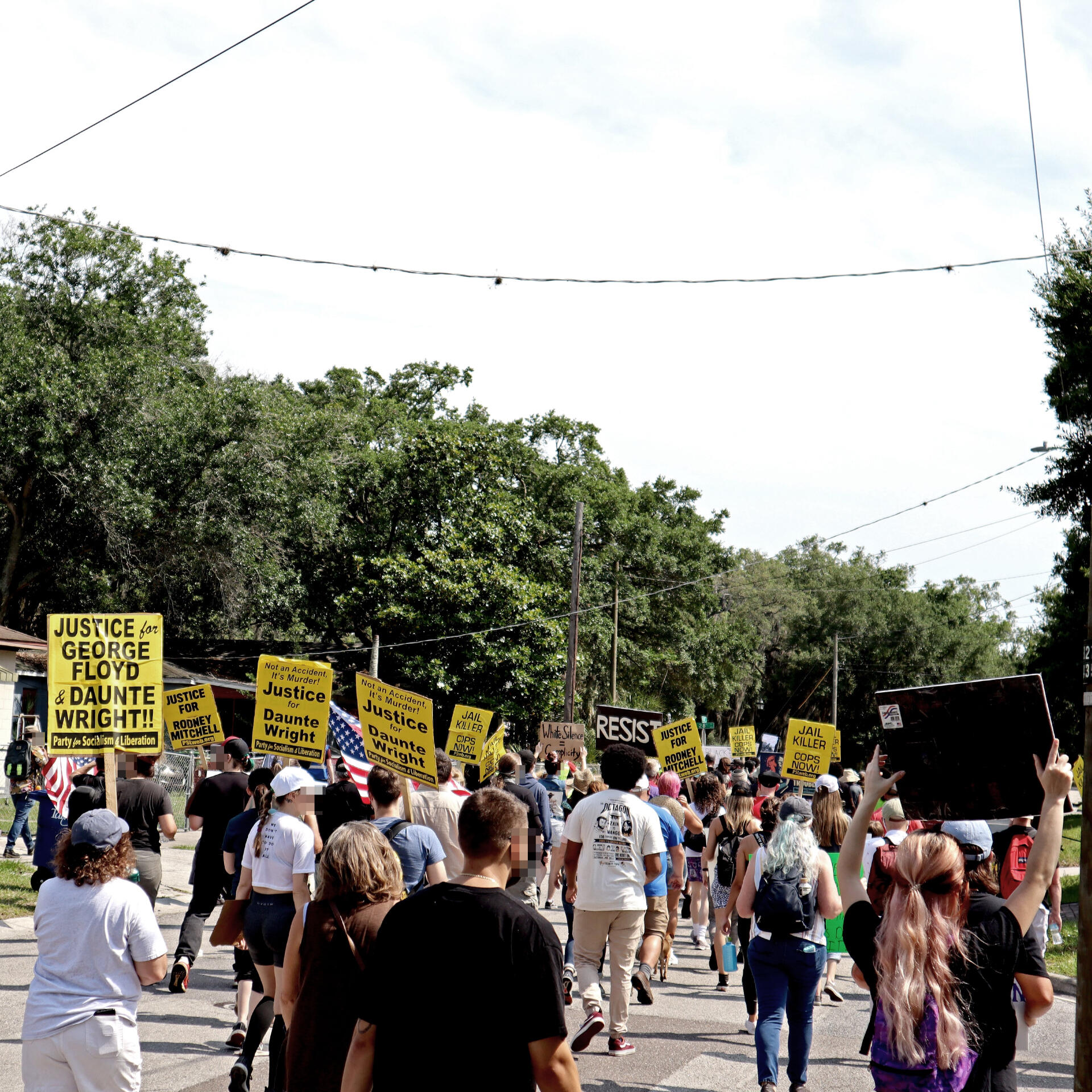